There's this website I love, setlist.fm, where fans post the set lists from shows they've seen.  What I'm talking about is the list and ordering of songs an artist plays in a particular show.  Especially when a band I love is touring, I'll go to setlist.fm and check out the postings from recent shows to see which songs they're playing what they're opening with, what they're playing off the new album, how deep into their back catalog they're digging, what they're playing as encores, whether they're changing things up much from night to night - that sort of ubernerdy music-fan stuff.

I don't know how they go about putting their set lists together, but as a non-professional musician, I try not to take it too seriously.  At most of my shows, most of my songs will be unfamiliar to most of the people there, so it's really not the same as for professional touring bands.  I usually make it up shortly before the show, sitting at a table with a list of the songs I play, writing the evening's set list out on a piece of paper torn from my journal.  Susan has all these photos of me doing this at various coffeehouses, pubs, and cafes - like this one: 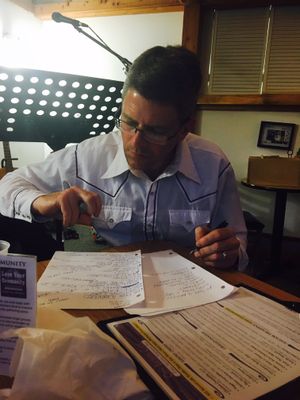 About my only "rules" in creating the set list are (1) to start with a song that I'm not likely to mess up (yes, really, and it doesn't always work), and (2) I usually end with my song "Good Things Are Gonna Happen for You," which is sort of my parting word of hope and blessing.  In between, I just feel my way along, ordering the songs in such a way that, hopefully, both I and the people listening are able to have a good time and stay engaged.  That means, roughly speaking, alternating among my "catchier" tunes - those that tend to grab people the quickest - and songs that require closer listening, or that maybe have a darker or more intense feel.  The majority of my songs are in major keys, but there are several that are minor-key, and I also try to pepper those throughout the show so that the major and minor tunes can act as "counterpoints" to each other.  And I try not to "bunch up" songs that are thematically similar. 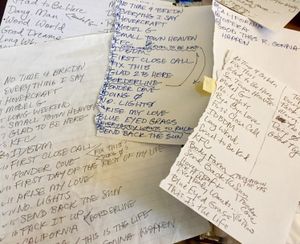 One time I very deliberately ordered the songs so as to create a sort of single narrative - which actually worked pretty well but isn't the kind of thing you can do all the time.  Or I guess I could, but I just find it more fun to approach it anew every show.  And here's the thing: if someone who comes to a show can really connect with just one song, I'm happy.  So I hope to see you at one of my upcoming gigs - if you come early, you'll probably see me sitting at a table scribbling song titles on a piece of journal paper...

PS: Susan says that what I do is come up with the set list days ahead of time, and then change it all around on the night of the show - which may be partly true. 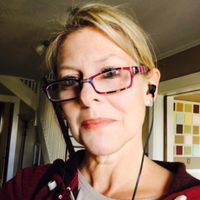